Sino-Russia Relations in the Era of Great Power Politics

President Putin made an official state visit to China to attend the annual summit of the Shanghai Cooperation Organization (SCO), a regional economic and security organization that includes China and Russia along with other South and Central Asian countries. Its head of states meeting took place in the coastal city of Qingdao. Before the summit, Putin had bilateral meetings with the Chinese leadership in Beijing, including President Xi Jinping and Premier Li Keqiang.

Before Putin’s trip to Qingdao, a high-ranking Chinese diplomat described the Russian President’s trip to China as an ‘important event for the bilateral relations’, whereas a senior Russian diplomat in charge for Moscow’s policy in the Asia Pacific region noted that the cooperation between the two neighbouring countries are experiencing the ‘best state in their history’. Remarks that emphasizes President Xi’s earlier claim that relations between Moscow and Beijing are in their ‘best time of history’. This was the first meeting between Putin and Xi in 2018.

While the two countries boosted their relations since they signed the Treaty of Good-Neighbourliness and Friendly Cooperation in 2001, Vladimir Putin developed a personal relationship with the President of China Xi Jinping. They had met more than 20 times since 2012 when Putin started his third term in the Kremlin and Xi assumed the Chinese presidency. Putin recently described President Xi as a ‘reliable partner’. As a sign of the strong bilateral relations between the world’s leading country by population and the world’s largest country by territory, Putin awarded the Order of St Andrew to President Xi last year; while in return, Xi honoured President Putin with the Chinese Order of Friendship during his recent visit to China. The highest friendship medals of both countries.

One of the key issues that make Russia and China closer to each other since the end of the Cold War is the new US policy that prioritizes countering both China and Russia. In the recent National Security and National Defence strategies, Washington called Russia and China ‘strategic competitors’ and ‘revisionist powers’. In the National Defence Strategy, it precisely states ‘interstate competition, not terrorism is the primary security concern of the US’. This means that the US is no longer focusing on the Middle East, but its center of attention is on the Asia Pacific region, where a new power is rising (China). 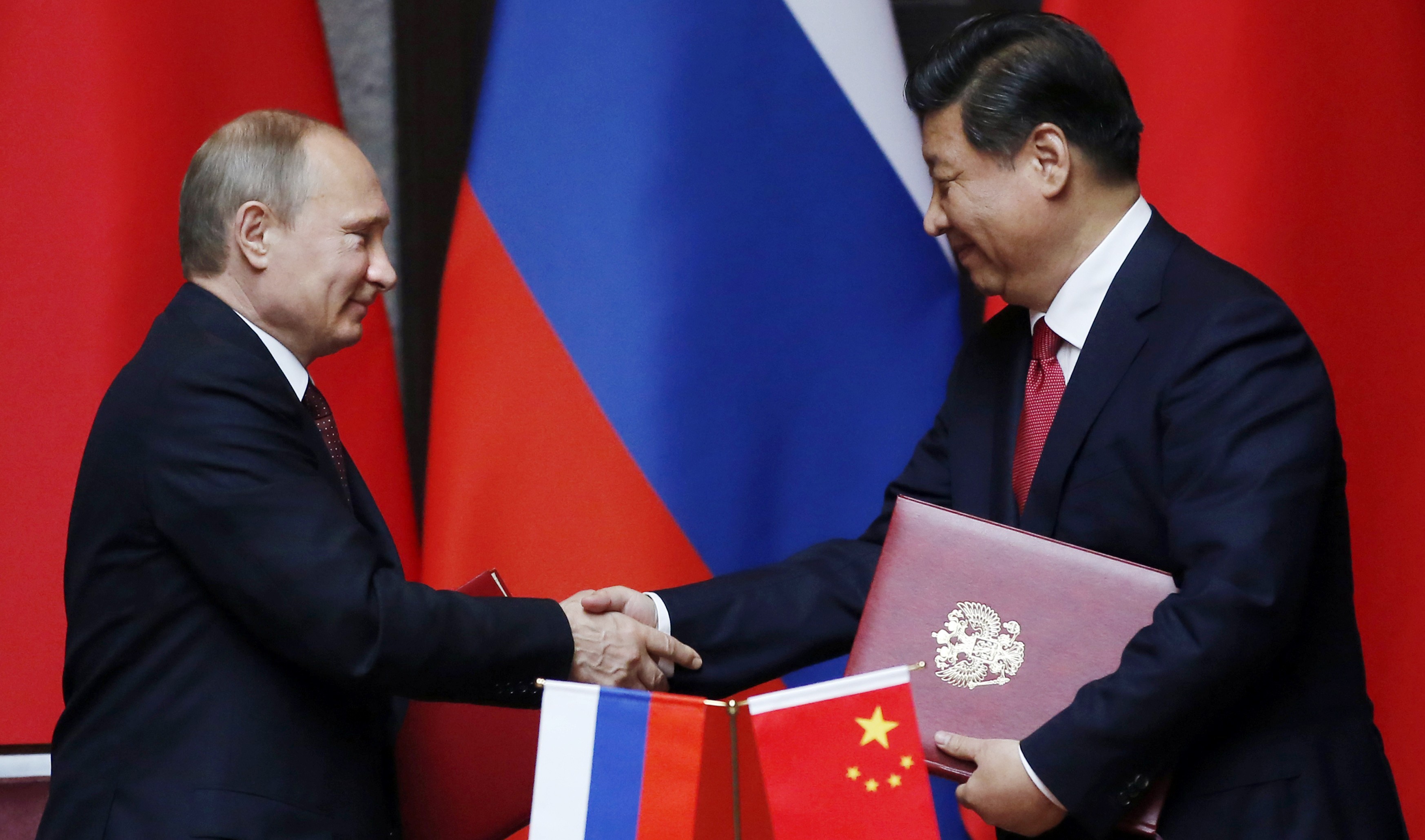 As the era of Great Power competition is back, the US organized a Quadrilateral strategic dialogue that involves Australia, India, and Japan along with the United States to counter China’s influence in the Asia Pacific region. The Pentagon renamed its Pacific combatant command to Indo-Pacific command in an attempt to create a broad orbit to counter China’s expansion that includes not only Pacific states, but also others in the Indian Ocean, including India. Washington already used the term ‘Indo-Pacific’ in its strategic documents like the US National Security Strategy. Meanwhile, the US Navy is activating its second fleet in the North of the Atlantic to respond to Russia’s increasing assertiveness.

Cooperation already exists between China and Russia both in a bilateral level as well as a multilateral one. First and foremost, the trade between the two countries expanded, and China is the biggest trade partner for Russia as Moscow is facing economic and trade sanctions from its European neighbours (the European Union) as well as the United States due to Russia’s annexation of Crimea and the ongoing crisis in Ukraine. Since the trade between the two developed, China benefited because it increased its presence in the Eurasia region in order to counterbalance the US dominance and it becomes a market for Russia’s oil and gas, which is important for China’s growing economy. For Russia, China is an important customer for its oil and gas.

Second, the security and defence cooperation between the two countries is growing well. The militaries of both countries hold regular joint military exercises that involve dozens of military helicopters and vessels. Russia is an important supplier of weapons to China.

Third, in terms of international security challenges that both countries face. Although Afghanistan is not a full member of the Shanghai Cooperation Organization (SCO), the ongoing security challenges in Afghanistan pose a direct threat to the SCO member states, including Russia and China while Afghanistan borders with three SCO member states (Pakistan, Uzbekistan and Tajikistan). In response to Afghanistan security problems, the SCO created a security framework that deals with information sharing, counter terrorism and drug trafficking. This also makes Russia to consider a new strategy to resolve the conflicts in Afghanistan without the US involvement, as Russian security officials presented to their SCO counterparts recently.

On the Korean Peninsula, both China and Russia embraces the denuclearization of North Korea as it serves in their security interests. However, as new developments are made on a dialogue with North Korea, it seems to both countries that Washington is sidelining Moscow and Beijing from the talks with North Korea as the multilateral six party talks (China, Japan, North Korea, Russia, South Korea and the United States) no longer exists. This makes both countries to bilaterally intensify their ties with the North Korean leadership as the United States and South Korea did. In addition, it seems that both countries are willing to ease sanctions against the Democratic People’s Republic of Korea (DPRK) as a gesture of goodwill to reward Pyongyang for its decision to negotiate on its nuclear program. Russian foreign minister Sergei Lavrov made that clear to his North Korean counterpart in Pyongyang ‘there is no solution to the Korean Peninsula’s nuclear issues unless sanctions are lifted’. Kim Jong Un is invited to visit Russia later this year while he met with President Xi twice in the spring before the US-DPRK summit that is expected to take place on the 12th of June.

In addition, both Russia and China expressed their commitment to preserving the Iranian nuclear deal, in the wake of the US withdrawal from the agreement. Iranian foreign minister Javad Zarif visited Beijing and Moscow before his trip to Brussels and one of Tehran’s options if the deal collapses, formally known as the Joint Comprehensive Plan of Action is to follow its previous ‘look east policy’, which will deepen its economic ties with China. Iran is already an observer member of the Shanghai Cooperation Organization, and China is the biggest trading partner of Iran. While the European Union and the European parties of the nuclear accord (Britain, France and Germany) expressed their pledge to keep the deal, yet they have not proposed major initiatives that can keep the European companies that are doing business with Iran away from the resumption of sanctions against Iran from the United States. The US withdrawal from the deal provides a vast opportunity for Beijing to engage closely with Tehran economically as the ambitious Chinese Belt and Road Initiative (BRI) play a role in strengthening the trade relations between the two countries. However, Beijing is vigilant with its ties with Tehran and is not willing to confront Washington on the Iranian case. The renewing sanctions from the United States to Iran will somehow reduce its trading partnership with China and will challenge Tehran’s quest to become a full member of Shanghai Cooperation Organization (SCO) if the United Nations agrees to impose sanctions.

Beijing and Moscow also share the commitment of challenging the current global order that is led by the United States and they both advocate for a world where there are several center of power, instead of one hegemony. Multilaterally, they are both members of the UN Security Council, BRICS the G-20 and SCO. Although both countries have not yet presented a comprehensive alternative to challenge the current system, both countries created new initiatives to engage multilaterally in terms of security, economy and trade with other non-western powers like India, Brazil, Iran and South Africa in a BRICS format or in the SCO format.

To sum up, while both countries have shared interests in many global and regional issues, merging an alliance between the world’s largest population and the world’s leading country by territory is unlikely.

But this doesn’t mean that there are serious tensions between China and Russia, but they are smart enough to manage their differences. Both Moscow and Beijing share their own criticism towards the world order where one power (the United States) dominates the global governance, nevertheless both countries do not have a common agreement on how a more fairer world would be. In China’s view, the Sino-American relation is the most important relation in the world in the 21st century. The US is the second largest destiny for China’s trade after the European Union (EU). Thus, Beijing is not willing to confront the US in a number of areas. Also, both countries do not share a will on the future of global governance. Beijing is seeking a bipolar world, where there are two centers of power (Washington and Beijing), while Moscow’s view is not clear. They desire to become a middle power that balances the two global powers.

On the other hand, as the US presence in the Asia Pacific region is expanding in order to counter China’s expansion in the region, Russia, another pacific power sees things differently from the perspectives of both Washington and Beijing. While the strategic thinking in both the US and China is that one power should overlook the pacific region and countering one another is in their interests, in Moscow’s point of view, the pacific region should be a region where there is no dominant power exists.

On a military level, while the Shanghai Cooperation Organization comprises of four nuclear-armed states (China, India, Pakistan and Russia), and the organization provides a platform for all its member states to coordinate and share information with one another, this does not mean that the SCO can eventually develop into a military alliance due to several reasons. First, the rockiness of relations between its member states makes an alliance unlikely in the near future (e.g. China-India relations or India-Pakistan ties). Second, even as Russia and China are the powerful members of the SCO, they have divergent interests in Central Asia. While the US interests in Central Asia are limited to the War in Afghanistan and to some extent its commercial interests in the energy of the Caspian Basin, Moscow and Beijing agree to limit Washington’s presence in the region. Moscow considers Central Asia crucial for its sphere of influence and while Beijing is expanding its presence in the region by investment under the Belt and Road Initiative to have an influence in Eurasia. Russia is opposed to anything that challenges its hegemony in the region; nevertheless, there is some degree of cooperation between Beijing and Moscow in Central Asia under the SCO.

This makes the two countries partners that have some degree of friendly relations, but not allies.

There are also minor issues that can undermine the strategic partnership by creating a degree of distrust with one another. While Russia is expanding its ties with other Asian regional powers like India and Vietnam, China is wary due to its adversarial relations with both New Delhi and Hanoi. These challenges may hinder the relations between the two countries to reach a level of a strategic alliance, but it will not certainly distance Moscow from Beijing in the near future unless unpredictable strategic shifts come from the United States. A reason that China-Russia ties will survive is that Moscow is not willing to compete with Beijing, but they are eager to cooperate and manage their differences.

Yacqub Ismail is a political analyst. He is a regular contributor to the International Policy Digest. He can be reached out on Twitter @Yacqubismial and email Yacqubismial@hotmail.com