A Resurgent Russia and A Rising UAE in the Gulf

During a working visit to Russia in last week, Sheikh Mohamed bin Zayed Al Nahyan, the Crown Prince of Abu Dhabi, concluded a Declaration of Strategic Partnership with his host, Russian president Vladimir Putin. The elevation in bilateral ties aims to strengthen cooperation in various dimensions, including oil market stability and combatting terrorism. Given that this declaration is a first for Russia in the Gulf, it implies that the United Arab Emirates has become Russia’s most valuable interlocutor in the region.

The UAE is Russia’s largest trade partner among the Gulf states thanks to an economy that is more diversified, better regulated, and more business-friendly than other Gulf states. Between 2000 and 2017, trade volume grew from US$0.2 billion to US$1.6 billion; it reached a record of US$2.5 billion in 2013. Comparatively, Russia-Saudi trade was less than $0.9 billion in 2016. Russia does not have any significant foothold in the lucrative arms bazaars of the Gulf states or of the UAE; in the latter, the West is the source of 80% of weaponry imports. Nevertheless, the UAE’s announcement in 2017 of its intention to purchase anti-armour missiles and Sukhoi fighters, as well as to jointly develop a light combat fighter jet, make the UAE the most promising partner for Russia among the Gulf states.

Russia is among the top source markets for inbound tourism in the emirates of Dubai and Fujairah. The introduction of visas on arrivals for Russian tourists last year, visa-free travel for Emiratis to Russia from August 2018, and new fight routes between both countries will augment co-operation in tourism.

FDI is the one area with room for improvement in bilateral relations. Nevertheless, the gap between declared and actual investments has been reduced recently. This is partly a consequence of Abu Dhabi’s acquisitions of a minority stake in Russian Helicopters and a 44% stake in Gazprom’s oil subsidiary in 2017 and 2018 respectively.

Russia and the UAE are also significant stakeholders and interlocutors in global oil markets. The high levels of compliance with output targets in the oil-output deal since 2017 contrast sharply with Russia’s historically poor record in co-ordinating output cuts with OPEC and sticking to agreed levels. The success of the current oil-output deal serves as an important confidence building measure and provides a platform for future discussions on a 10-20 year oil agreement.

Outside of the economy, the UAE, more so than any other Gulf state, shares with Russia similar perspectives about conflicts in the Middle East. For instance, their leaders are unequivocal and unapologetic about rooting out all forms and variants of extremism; in comparison, the other Gulf monarchies have been slower to embrace counterterrorism measures. The UAE is also more amenable than Saudi Arabia over a future role for Bashar Al-Assad in Syria. 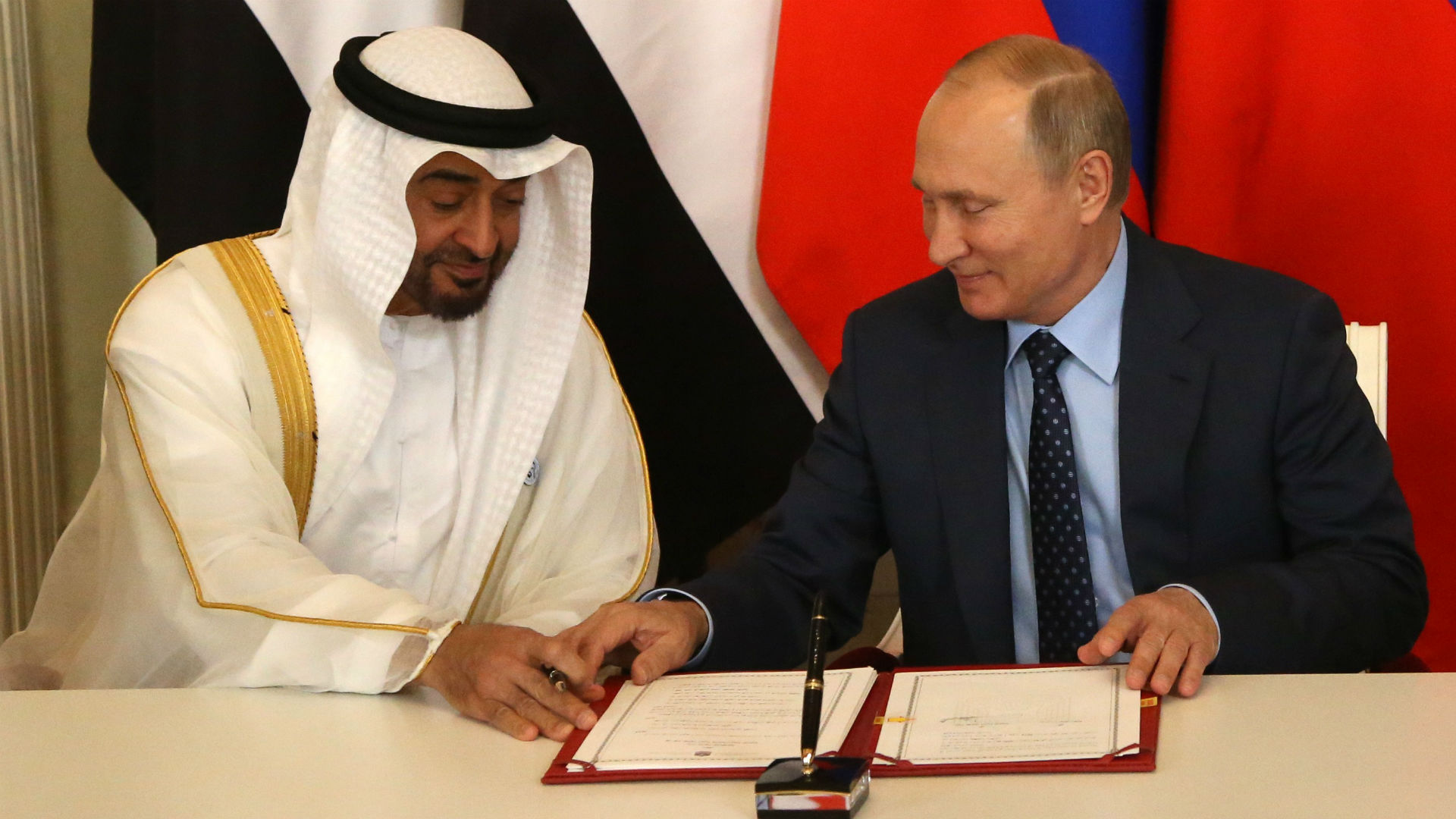 On the one hand, the intention to proceed with the Declaration has been in the works since April 2017, when Sheikh Mohamed was last in Moscow. The Declaration acknowledges Russia’s appreciation that the UAE has long been a reliable partner as noted above. It also underlines the UAE recognition of Russia’s indispensable role in regional and international affairs, a demand that become more prominent and strident in shaping Russia’s foreign policy under Putin. In Yemen, for instance, the UAE is thought to be seeking Russia’s help to extricate itself and Saudi Arabia from their war with the Houthis, given Russia’s relations with Iran and different factions in Yemen. Where Russia was once dismissed as a mere regional power, it is now widely feted as the new king-maker in the Middle East – or excoriated as an eternally disruptive and negative force, depending on one’s point of view.

On the other hand, the timing of the Declaration coincides with the first anniversary of the intra-Gulf dispute over Qatar. Qatar remains unbowed and has tried to cosy up to a resurgent Russia through its May 2018 purchase of a 19% stake in Rosneft, the largest Russian oil producer, and its intention to purchase Russia’s S-400 anti-missile system. In this regard, the Declaration may be the UAE’s attempt to deploy soft power to woo Russia away from Qatar, thereby complementing Saudi Arabia’s threat of military action against Qatar should it acquire the S-400. There exists historical precedents for this kind of deal making: in 2013 and 2016, Russia was apparently offered economic and financial inducements by Saudi Arabia in exchange for abandoning Assad; it politely declined.

Is a military role for Russia in the works?

It is highly unlikely that the Russia-UAE Declaration will result in a military role for Russia in the UAE and the Gulf. Russia’s military intervention in Syria – its first projection of force beyond the borders of the former Soviet Union – was an exception born of a perfect storm of factors unlikely to be replicated anytime soon and especially not in the Gulf.

The UAE has no need for another security guarantor in view of monarchial resilience in the UAE – thanks to a combination of repression, distribution of resource rents, charismatic authority, developmentalist agendas, and foreign patronage – and an increasingly competent and sophisticated military. On its part, Russia has no desire to upend the USA’s hegemony in the Gulf. The latter has brought relative stability, predictability, and unprecedented prosperity, which protects Russia’s growing trade and investments ties with these countries. The USA’s deep engagement in the region also acts as a useful lightning rod for terrorists; its departure would re-focus their attention on Russia’s transgressions against Muslim communities in the north Caucasus and Central Asia. Moreover, there is an enormous chasm in military power between Russia and US. In discounting direct conflict between the two, a Russian journalist noted that Putin “is a megalomaniac – he is convinced he is ten times better than any Western leader…Narcissism is one thing; suicidal tendencies are another. He is not suicidal.” Russia values its independence in foreign policy; it is happy to dance at everyone’s wedding but avoids ending up at the altar. This is arguably an advantage in a conflict-prone region with ever-shifting alignments.

Russia under Putin desires to reduce America’s footprint in the Gulf and consequently, for Russia to play a larger role commensurate with its self-identification as a great power. It is to Russia’s credit that it recognizes its interests in the UAE can be best enhanced through non-military means, as envisioned by the Russia-UAE Declaration.

Li-Chen Sim is Chair of the Social Sciences department at Zayed University, UAE. She is a specialist on Russian foreign policy and energy politics in the Gulf. Her co-edited book, External Powers and the Gulf States, will be published by Routledge in August 2018.